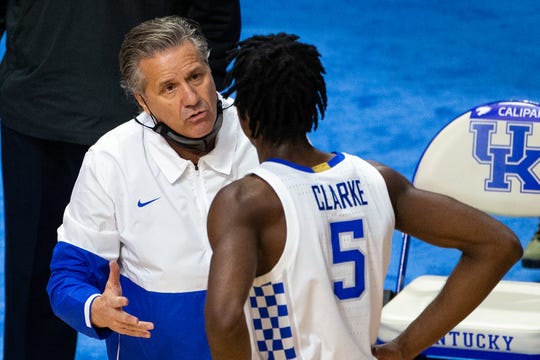 The Wildcats (1-2) lost to mid-major Richmond in the Bluegrass Showcase on Sunday. They turned the ball over 21 times and were 0 for 10 from three-point range. Tuesday’s loss to Kansas, a top-tier opponent, was a slight improvement (16 turnovers and 3 for 21 from beyond the arc), but the Wildcats still made poor decisions. Aside from freshman BJ Boston, the offense is stagnant.

“They’ve got to go through this; it’s all part of the growth of this,” coach John Calipari said. “(Kansas) punked us. We couldn’t even bring in the ball.”

Calipari is a master at meshing five-star talent and fostering an egos-at-the-door culture, but at first glance, this UK roster is not a top-10 team. It will have more growing pains as it tries to evolve into a contending Kentucky squad we’re used to seeing.

The Cavaliers (2-1) remain ACC title contenders because coach Tony Bennett’s methodical offensive system and pack-line defense position them to offset other teams’ high-octane offenses with a slower tempo. But that can also work against them and allow mid-major opponents to pull off shocking upsets (ahem, UMBC 2018). Virginia was upset by mid-major San Francisco on Nov. 27, but there’s plenty of time to regroup. Preseason All-American Sam Hauser can be the difference-maker, but the supporting cast will have to fill in more offense.

The preseason No. 8 team in the coaches’ poll played like the lesser-ranked team in Tuesday’s Champions Classic loss against No. 12 Michigan State. Coach Mike Krzyzewski has a young group that hasn’t blended well yet, and it’s clearly going to take some time to develop chemistry. In a season where depth will be necessary, right now, it doesn’t look like Duke has much.

Expectations are high for No. 10 Illinois, as coach Brad Underwood brought back two future NBA talents — preseason All-Americans Ayo Dosunmu and Kofi Cockburn. But a scare against Ohio on Nov. 27 is worrisome, and this week’s loss to No. 1 Baylor was a missed opportunity for a huge win and program breakthrough. All in all, the Illini are in good shape, but they’ll need to lock in better defensively and keep Cockburn out of foul trouble if they want to move into the national contender conversation.

More luggage was mishandled in 2021 due to staffing shortages: report

In Maine, a proposed $1B patriotic park will feature 1,776-foot tall flagpole

This desi food plate can help you lose weight

Opinion: Why I’m ditching my comfy Canadian lifestyle for Ukraine