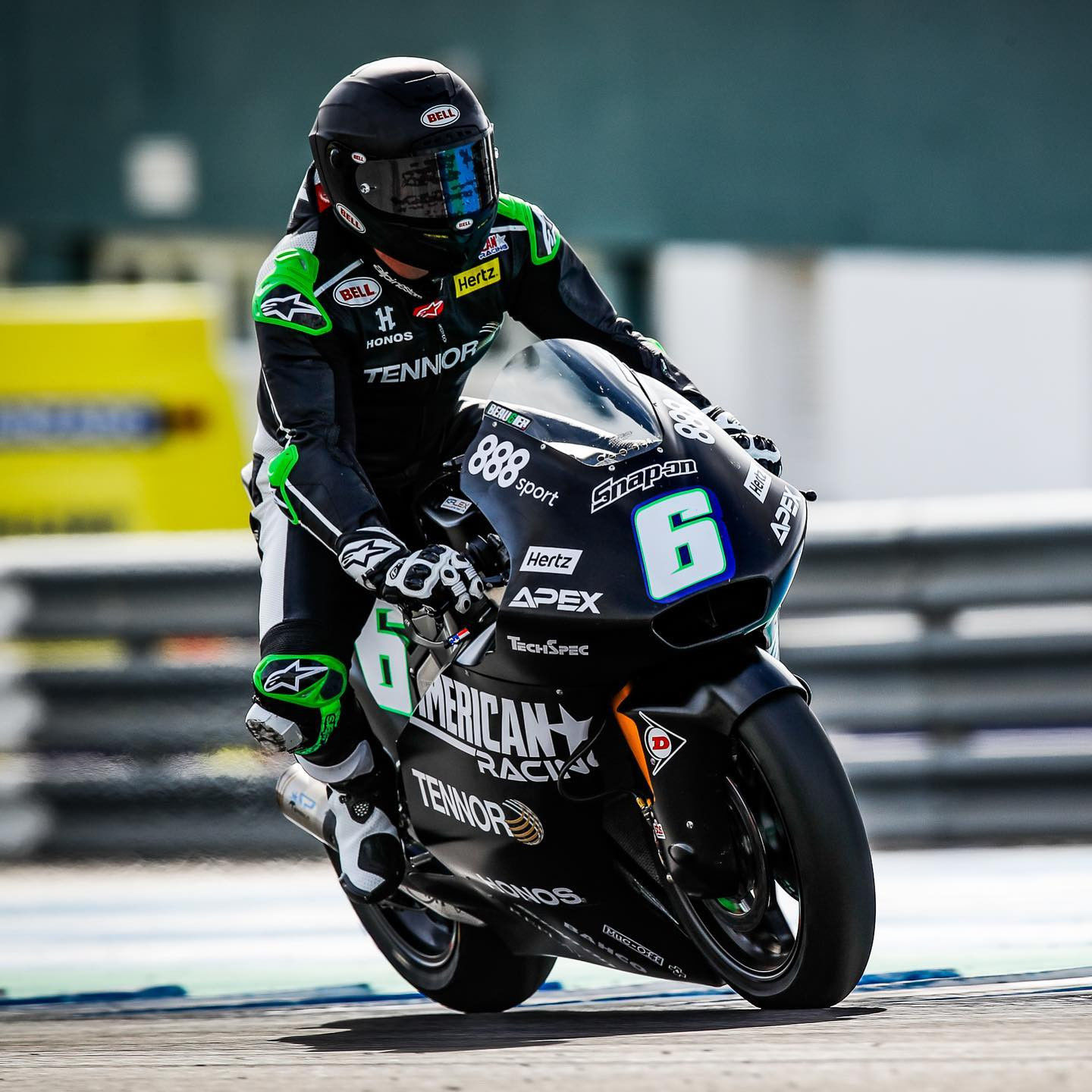 “It was good to meet everybody, meet the team and get to know them, just to get my feet wet, just to know what to expect for next year and get a good first impression of the bike and all that,” Beaubier told Roadracingworld.com. “The first day on Thursday [November 26], I just went out for some half-wet/half-dry laps on rain tires just to kind of get a feel for the bike. Then Friday [November 27] it ended up being mostly dry, like dry with some wet patches here and there.”

Beaubier said he was surprised by the Triumph 765 Triple engine in his Kalex, explaining, “I was pretty impressed with how much torque the bike had, and those things corner so frickin’ good. They just rip through the corners.

“The chassis is so much more rigid than anything I’m used to here. They just carve through the corners, and when they slide a little bit they snap. They’re more aggressive. They’re a purpose-built racebike. And without the [sophisticated] traction control and wheelie control the bike is more alive than what I’ve been used to lately. So, I think that’s going to take some getting used to, but it was cool.

“The Dunlops, the grip felt pretty similar to what we have here, but the shape of the tires is so different and so is the way the bike leans into the corners. They don’t just fall into the corner the way they do here. You have to put a little more effort into getting it turned in, but once the things is turned in, it just turns!

“I was kind of surprised too by how much you have to pick the thing up to get out of the corner, like how much grip you can find by picking the bike up, stuff like that.

“I was just thinking I was going back to a 600. I know how a 600 feels compared to a Superbike, and this thing didn’t feel like that. It had quite a bit of torque on the bottom. It was cool.”

Things went so well, in fact, that Beaubier admits his mental approach to the test changed.

“We started off the test [thinking] we’re not going to look at lap times,” said Beaubier. “We’re just going to focus on getting used to the bike and spinning some laps, just get acclimated to the bike and relearn the track, because I hadn’t been there in like 11 years or something like that.

“Then, I don’t know, after I started getting more comfortable I started looking at the times. The racer side of me started to come out. (laughs) You want to be somewhat close, right?”

Beaubier ended his first day seventh-quickest of the 12 riders present with a best time of 1:42.664, exactly 0.6 second behind his new teammate Marcos Ramirez, who led the day with a 1:42.064.

“I’m glad that I was somewhat close,” said Beaubier. “I wasn’t expecting to go over there and be P1 or nothing. I wanted to be somewhat competitive just to have a decent start and more than anything to know what to expect going into next year.

“Those guys are incredible riders. Watching them ride was pretty impressive. They are some of best riders in the world, and it was cool to be out there with them at that test to have a good reference.

“Obviously, I’m going to need some more time on the bike. We want to try some new bars to change my riding position and make it more comfortable for me to hang of the bike more. It seems like I’m going to need to do more of that.”

“I’m working with this guy, his name is Luca Capocchiano,” said Beaubier. “He was Enea Bastianini’s Crew Chief last year, and they won the World Championship. So I’m super pumped to have him in my corner. It’s going to be awesome working with him. We got on great at the first test. He obviously has a lot of knowledge and knows what we need to do moving forward.

“I’m pretty excited to be working with him and the whole team. The team seems to be a family-oriented team. It was cool.”

Asked what happens next, Beaubier said, “I’m hoping we get a test in February before we go to the official tests [in March], but I’m not sure. I think they’re still trying to figure that out. But I’ll sleep better this off-season knowing that I rode the bike and know what to expect going into next year.”