An American-based sports website, picking up on the frustration experienced by travelers passing through Pearson Airport in Mississauga, is offering a T-shirt to express how some feel about flight cancellations and delays.

The “Pearson Airport Sucks” T-shirt is currently available through Barstool Sports at a cost of $37. The shirt, coming in the blue and white colours used by several Toronto sport teams, is available in all sizes. 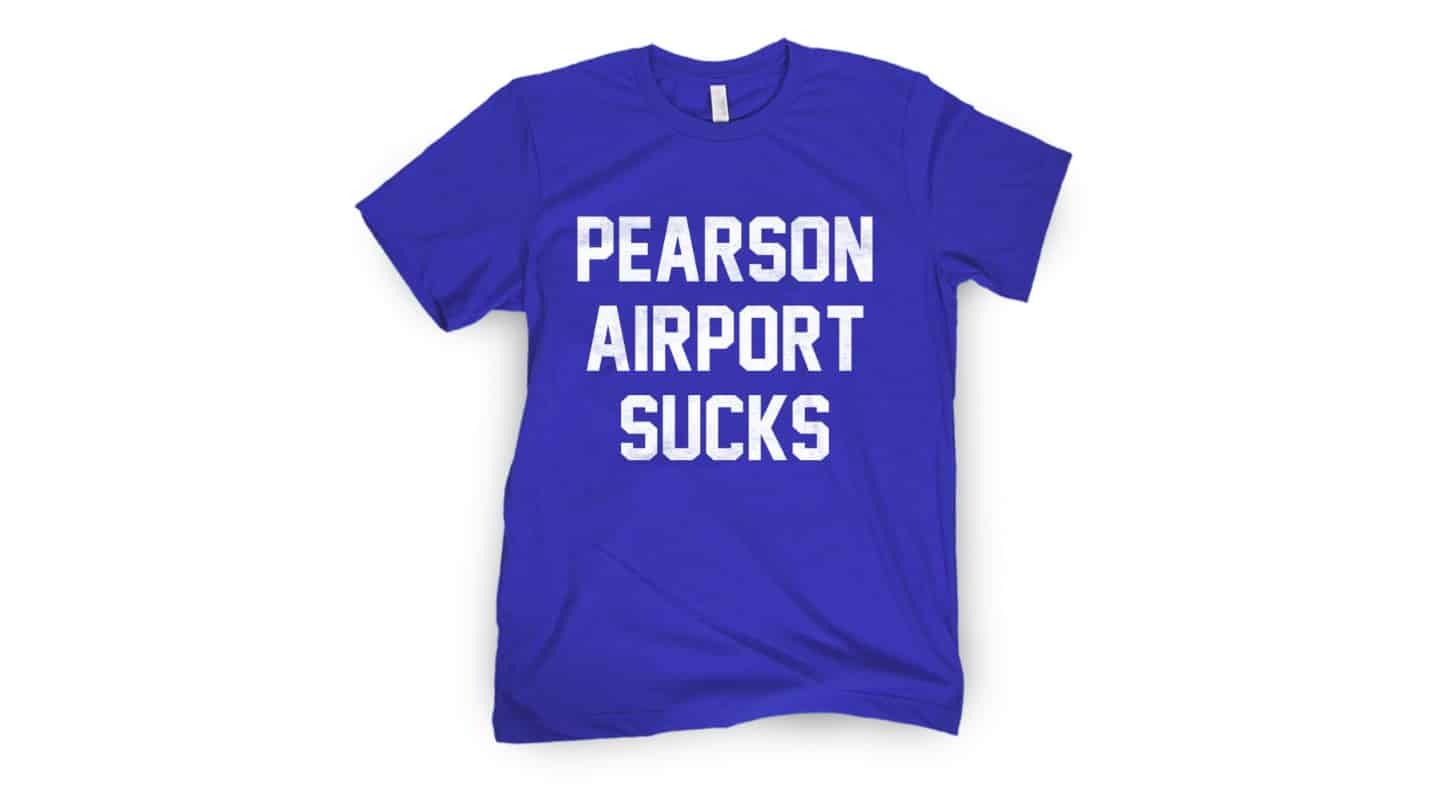 While the sale of the shirts started out somewhat as a gag, reports indicate production began once customers started to place orders.

The shirts also pick up on the frustration experienced by former NHL player turned podcaster Ryan Whitney who took to Twitter last weekend to complain about cancellations and delays at Pearson.

Whitney, who has a relationship with Barstool Sports, called Pearson “the worst place on earth” after being stuck at the airport for seven hours was he had to wait in processing lines, go through health checks, and ultimately told that his Air Canada flight was cancelled. His “tweets” were liked by almost 25,000 people.

I live at Toronto Pearson International airport. The worst place on earth. I smell so bad. pic.twitter.com/PfdnHcO7Ad

Whitney’s experience echo the concerns of thousands of passengers of have passed through Pearson in recent months. Complaints have ranged from being forced to wait on planes for hours once they have landed, long lines to go through customs and COVID health checks, not being able to find luggage and cancelled flights.

Just today it was revealed that Air Canada has been cancelling flights at an alarming rate at Pearson Airport in Mississauga — almost 10 per cent since the beginning of June.

Data shows that in the first seven days of June, 360 flights at Pearson have been cancelled as the airline copes with an increase of passengers combined with staff shortages that declined during the pandemic and haven’t been rebuilt.

Other airlines report they have also been cancelling flights, but to a lesser extent than Air Canada.

A statement released by Air Canada after Whitney made his experience public, said long processing times and other restrictions resulted in flight delays and in some instances cancellations which has affected passenger service.

“These factors along with an issue with the airport’s baggage system Sunday are what caused Mr. Whitney’s original flight to be cancelled,” the statement reads. “We regret the inconvenience these issues are causing some customers are we are working hard with our third-party partners to improve the situation as quickly as possible.”

Last week, Canada’s Transport Minister Omar Alghabra said the airport is working to increase staff at the airport to deal with delays but he said increased passenger traffic has also contributed to the problems at Pearson.

Coincidently, Dave Portnoy, the founder of Barstool Sports, was in Mississauga recently. Even though he didn’t voice any complaints about Pearson he did get to sample pizza from two Port Credit businesses. He liked both.

More luggage was mishandled in 2021 due to staffing shortages: report

In Maine, a proposed $1B patriotic park will feature 1,776-foot tall flagpole

This desi food plate can help you lose weight

Opinion: Why I’m ditching my comfy Canadian lifestyle for Ukraine